On April 2nd, 1863, several hundred women in Richmond, Virginia marched to the governor’s mansion to protest skyrocketing food prices that had put them on the verge of famine. With the governor unable or unwilling to offer much support, the group ballooned into a mob of over a thousand and started ransacking shops and warehouses shouting “Bread! Bread! Our children are starving while the rich roll in wealth!” To end the riot took the mobilization of a militia and Confederate President Jefferson Davis himself arriving and warning the women they’d be fired upon if they didn’t disperse.

When the Civil War began in 1861 the price of a barrel of flour, though it varied by region, was in the range of $5 - $7. By 1863, Richmond shopkeepers were reportedly asking $70 a barrel for what limited supplies they had left. Why? Well, let’s look at the most basic concept in economics, the supply and demand model. 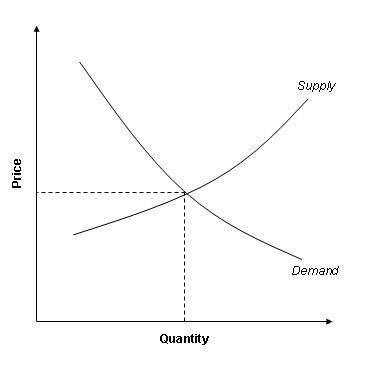 The chart shows there are only two reasons prices can rise – an increase in demand (demand curve shifts to the right) or a decrease in supply (supply curve shifts to left). Why might prices have soared in the Confederacy? Were people suddenly demanding significantly more food? Of course not. Prices surged because the war lowered supply as the Union Army conquered prime agricultural regions, farm manpower was diverted to soldiering (plus slaves fled to Union lines), and railway infrastructure to ship food was destroyed or prioritized for military transport.

A shortage of salt, the only means of food preservation at that time, also caused a surge in meat prices. Prior to the war, the South imported all its salt from the North. Not surprisingly, the price for a bag rose from $2 in 1860 to $60 two years later. Southerners’ misery was further compounded by a severe drought in 1862, which tightened the food supply even more.

So inflation got out of control in the Confederacy not because of an increase in demand but rather a catastrophic drop in supply. How did their government respond? The only way they could – by printing more currency. They needed food for their soldiers. But that level of supply simply didn’t exist no matter how much money they threw at the problem. In effect, the Confederacy had just one tool – money creation – that ran into an immovable object – lack of supply – with a predictable outcome – high inflation.

The infamous hyperinflation in Weimar Germany in the early 1920s happened along similar lines. The immovable object the German government faced after losing WWI was the Allies’ demand for reparations to the tune of 132 billion gold marks (50 billion due unconditionally with the rest dependent on Germany’s ability to pay). Germany had already abandoned the gold standard in 1914 to help finance the war so they had to make these payments “in kind” with agricultural and industrial machinery; commodities like coal, timber, and livestock; or foreign currency.

The problem for Germany was that they simply didn’t have this level of wealth following WWI. So the German government did the only thing they could – they printed currency (“paper marks”) to buy these goods as well as foreign currency (their primary focus) in a futile attempt to pay. Of course the more paper marks they printed, the more worthless their currency became.

When Germany failed to keep up with the reparation schedule, French and Belgian troops occupied its main industrial region, the Ruhr Valley, in 1922 to ensure the payments would at least be made in goods. Instead Germany encouraged its workers to strike (further reducing supply), then printed even more currency to pay those idle workers! Thus, just like the Confederacy, Weimar hyperinflation occurred not because of an increase in demand, but rather a lack of supply – in this case to make reparations payments – that money printing simply couldn’t solve.

What about the relatively high (though not hyper) inflation the U.S. experienced during the 1970s? From 1971 to 1981 the U.S. inflation rate averaged an uncomfortable 7.6% a year, more than doubling prices over that ten-year period. 1970s inflation largely reflected two factors – 1) government economic policy, and 2) oil shortages stemming from the 1973 OPEC oil embargo and 1979 oil crisis from the Iranian Revolution.

Starting with economic policy, prior to 1971, the U.S. was on a modified gold standard (referred to as the Bretton Woods system) where there was a fixed exchange rate between major world currencies and the U.S. dollar that was linked to the price of gold. In fact, before 1971 foreign central banks could still convert their U.S. dollar reserves into gold from the U.S. Treasury. The problem was that by then, thanks to large trade surpluses with the U.S., countries in Western Europe had far more dollar reserves than the U.S. Treasury had gold thus making the Bretton Woods system untenable.

After WWII, America injected billions of dollars of aid into Western Europe through the Marshall Plan to help quickly rebuild their infrastructure and economies. We also, through the Bretton Woods agreement, deliberately allowed the U.S. dollar to remain unnaturally strong relative to Western European currencies to encourage their export industries (a weak currency makes the prices of a country’s products more competitive in global trade). America didn’t do this out of the goodness of its heart but rather to ensure a strong enough economic recovery in Western Europe that they would stay free and democratic rather than sliding back into authoritarianism or turning to communism. By 1971, however, the political need for these policies had lessened and the economic imbalances that resulted had become too great for the arrangement to continue. So Nixon left Bretton Woods, which ended U.S. dollar convertibility into gold and allowed the dollar to float (move freely in foreign exchange markets) relative to other major currencies.

Since the U.S. dollar had been overvalued for decades to help Western European export industries, the abandonment of Bretton Woods caused the dollar to collapse, losing about 28% of its value over the next two years. Nixon compounded the problem by imposing a 10% tariff on foreign goods to try to lower the trade deficit as well as instituting wage and price controls to keep inflation at bay. Import prices including commodities rose sharply. But when companies couldn’t raise their prices in response to higher costs, profit margins fell, and they were forced to lay off employees. Then in 1973 the OPEC oil embargo caused oil prices to quadruple (by 1975) adding further fuel to the inflationary fire. The 1979 oil crisis then caused another three-fold increase such that by 1981 the price of oil was ten times higher than just a decade before.

Does 1970s era inflation have any lessons for us today? I would argue not many. The significant dollar depreciation was a necessary (though one-time) adjustment to the end of Bretton Woods. And the oil crises were just another example of a lack of supply (rather than too strong demand) causing inflationary pressures. Note, too, that the link between oil prices and inflation is no longer as strong today as it was in the 1970s. In fact, due to greater energy efficiency and a shift toward a more service vs. manufacturing based economy, the U.S. now uses just 1/3rd the energy to generate a dollar of economic output as it did 50 years ago. The result is that oil price surges, such as the five-fold increase we experienced from 2004 to 2008 no longer have much impact on overall U.S. inflation.

So how likely is high inflation in 2021 and beyond? Not very. As long as we don’t fight and lose a major war or have out-of-control civil unrest leading to a ruinous drop in our ability to produce goods and services, hyperinflation isn’t going to happen. And even getting to moderate levels of inflation will be difficult given our aging demographics, free floating currency, less energy/commodity dependent economy (not as impacted by commodity shortages), and the accelerating pace of technological change heightening competition and making businesses increasingly efficient. Japan, for instance, has been unsuccessful in attempts to spur even modest inflation despite running huge budget deficits for decades and having more than twice as much government debt, relative to the size of its economy, as the U.S.

Some contend America is already experiencing high inflation. But this argument is easily countered by looking at nominal (not inflation adjusted) economic growth over the past decade. Since 2010, the U.S. economy has grown just 3.6% a year without adjusting for inflation. That means if you believe inflation was greater than 3.6% a year over that time, the U.S. economy, in real terms, must have shrunk. To take a more extreme example, if you think inflation has really been running 10% a year for the last decade that would imply that today’s economy, in real terms, has collapsed to just half its size in 2010, which is
ridiculous on its face. In actuality, inflation has averaged about 1.7% a year, suggesting (far more believable) real economic growth of around 1.9% annually.

While we’ve positioned the PASI portfolio to benefit from a modest rise in inflation and interest rates as the economy recovers, I expect that even with the trillions of dollars in stimulus over the last year, those increases will be minor and fleeting. Much of the rise in government spending has merely offset the sharp drop in economic activity due to the pandemic. And continued high growth will be more difficult in 2022 without the benefit of further stimulus, which is now politically unlikely.

One factor that could result in some modest, though short-term inflation are pandemic-induced supply disruptions in industries where employees have been unable or unwilling to work full shifts (manufacturing and food service, particularly). But as the vaccines get us closer to herd immunity, I think those supply pressures will quickly fade, and capitalism will work its magic to keep inflation at bay.

One factor that could result in some modest, though short-term inflation are pandemic-induced supply disruptions in industries where employees have been unable or unwilling to work full shifts (manufacturing and food service, particularly). But as the vaccines get us closer to herd immunity, I think those supply pressures will quickly fade, and capitalism will work its magic to keep inflation at bay.